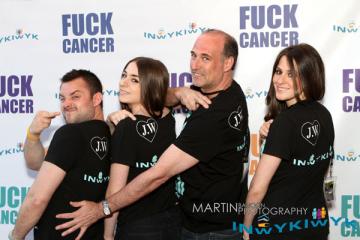 It’s something of an understatement to say that Montreal’s Greenbaum family really, really hates cancer.

Their innovative and unambiguously titled Fuck Cancer movement — which aims to “get the younger generation involved in beating this bitch of a disease” through a series of fundraising parties — likely wouldn’t have happened had they not lost 54-year-old wife and mother Jone Weltman to ovarian cancer in 2010.

And while there is no doubt the Greenbaums —  father, Hillel Greenbaum; 52; and kids, Jake, 24; Julie, 21; and Claire, 16 — would swap Fuck Cancer for Weltman’s return in a heartbeat, there is something to be said for channeling overwhelming loss and grief into positivity and then recruiting leagues of others to join your campaign.

Fuck Cancer works like this: the Greenbaums stage party nights at nightclubs. Admission is the cost of a T-shirt bearing the words ‘Fuck Cancer’ in one of eight colours which corresponds to various cancer ribbons:  pink for breast; sky blue for prostate;  teal for ovarian; white for lung; lime for lymphoma; royal blue for colon; purple for pancreatic;  orange for leukemia. Revelers wear the shirts; proceeds from sales are passed along — and that’s it.

As Julie explains, the idea isn’t to specifically disseminate cancer information on-site at the parties. Rather, it’s to provide an atmosphere for thought and engagement among those her age (21) who may potentially have a brush with cancer, personally or second-hand, if they haven’t already.

And while Julie admits the language surrounding the Fuck Cancer movement is contentious — possibly limiting broader media mention — she firmly believes it’s necessary to drive the point home. Plus, it was inspired by a real-life incident during her late mom’s cancer treatment.

Indeed, the most recent and fourth Fuck Cancer event so far, staged Oct. 4 in Montreal, drew in excess of 1,400 people. 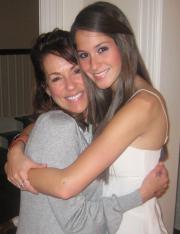 SamaritanMag: So the actual words ‘Fuck Cancer’ are based on something your mom said to a nurse during an especially awful lung biopsy she underwent?

Julie Greenbaum: That’s right. My dad, Hillel, was there with her and he described it as torture. They had to insert a probe through her nose down the throat and into the lungs where a small device could take tissue specimens. Afterwards a nurse came in and asked, kind of casually, ‘How are you doing?’ And my mom, feeling frustrated at that moment, caught her breath and said, ‘How am I doing?  This is a walk in the park… fuck cancer.’ So it came from that.

Our goal is not to offend anyone with the language. But from my experience of losing a mother at age 19, I find this disease very offensive and I want to attack it with an offensive word and with aggression. We do offer a censored shirt for those who may be uncomfortable with the vulgarity and we have no issue with that. But we’re not open to changing the slogan because we feel strongly and passionately about our attack on cancer.

SamaritanMag: So how did this concept get started?

Julie Greenbaum: When my dad and I launched the first party [in November, 2010], we didn’t really have plans to turn this into a movement. For me, it was really just, ‘I’m hurting and going through a rough time. Let’s reach out to our community and throw a party and raise some money.’ It was only after seeing the response of our second party [November, 2011] where we used social media and ended up attracting 1,000 people that we knew it was resonating with our target market.

The T-shirts were part of the concept from the beginning. I really wanted to figure out a cool and interactive way to get younger people, those 18 to 30 basically, to come out and support a cause. So instead of just buying a regular ticket as admission into a party, I thought it would be fun to make the T-shirts with our slogan be the actual ticket. You have to wear the T-shirt to get into the event. And it’s cool because you have hundreds of kids all wearing this bold and powerful statement. So it’s just like any other club night except the money raised goes to charity. Plus it’s less formal; my friends aren’t paying $150 to attend a gala, but they will spend $30 on a T-shirt to get into a club night.

SamaritanMag: And how are the proceeds dispersed?

Julie Greenbraum: In Montreal, we are set up with the Segal Cancer Centre at the Jewish General Hospital so we split the funds raised to support the different cancers we support. The same thing will happen in Toronto; we give the funds and they [the hospital foundation(s)] distribute them accordingly, divided by the eight cancers [colours] that we support. 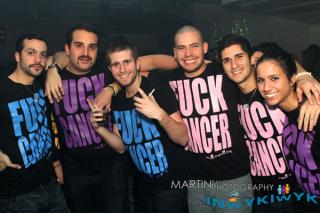 SamaritanMag: And yet you aren’t bombarding people with cancer information once they’re inside the clubs.

Julie Greenbaum: Right. It’s not intended as an educational experience. It’s really more a platform for people to…I hate to sound corny but one thing you’d experience if you came to one of the parties is a lot of love and support. You have the opportunity to talk with people who’ve experienced the disease.

And because the colour of our T-shirts corresponds with a specific kind of cancer, we provide an opportunity for people to support a cancer that’s affected them personally. So it really is a platform for connecting and engaging on a very raw level. And you realize everyone has a story and everyone is connected. Even though you are with strangers, you’re united to fight the same cause.

SamaritanMag: And is the goal to take the Fuck Cancer movement global?

Julie Greenbaum: Of course beginning with North America! We threw our first U.S. party in Los Angeles at the Avalon Nightclub about five months ago and it went really well. This seems to be something that resonates wherever we go.