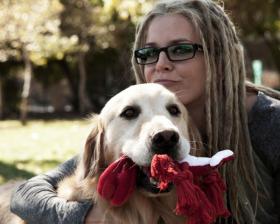 Rob Zombie directs people burning at the stake, bashing in heads and just does nasty things in general to the Homo sapiens in his new horror film, The Lords of Salem, but the gorgeous Golden Retriever remains safe and sound.

Zombie, who also fronts his namesake heavy rock band, has been a vegetarian for 30 years and a strong advocate of animal rights.

“The only thing I ever really care about is animals — animal causes. I don’t really care about people that much, but animals I feel like they always need to be protected,” Zombie told Samaritanmag, while in Toronto promoting The Lords of Salem.

It’s not like the filmmaker hasn’t incorporated animal mutilation in his films. Let’s face it — the guy makes horror films. In his remake of Halloween, furry creatures meet grizzly deaths (fake, of course).  But in The Lords of Salem, he uses the dog as an interesting device for the lead character, Heidi, played by his wife, Sheri Moon.

“You have this character, who, even though she’s on this radio show, she’s sort of a lonely person and a recovering drug addict, but the relationship she has with her dog shows,” says Zombie. “You can see the worst person in the world, but if they’re treating their dog nice, you go, ‘Awwwww.’ You don’t even know you’re thinking that. The dog really helps bring that out. It makes you like her character more.”

Zombie isn’t actively the face of any charity, but he supports People For The Ethical Treatment of Animals (PETA) and various animal causes. In 2010, he joined other rockers for the First Annual Humanity Thru Music concert and paw-sta dinner, to raise money for Fur & Feather Animal Sanctuary, resulting in Southern California’s first full no-kill animal sanctuary, medical and educational center. 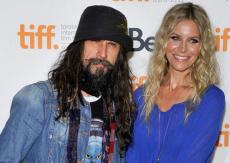 Last November, in time for Thanksgiving, he teamed up with PETA for a recorded message about the torture of turkeys before they end up in grocery stores. It is the animal rights organization’s response to poultry brand Butterball’s telephone hotline on how to cook a turkey.

"…Turkeys often become painfully crippled because they are given so many drugs to make them grow so unnaturally large and that their legs splinter," says Zombie on the recording. "The birds throats are often slit while they are still conscious and able to feel the pain...”

Says Zombie to Samaritanmag about finding a cause that’s important to you: “I think, hopefully, you tend to get that way as you get older because you can’t keep working and working, ‘Oh my career, me me me’ because it becomes so pointless.”