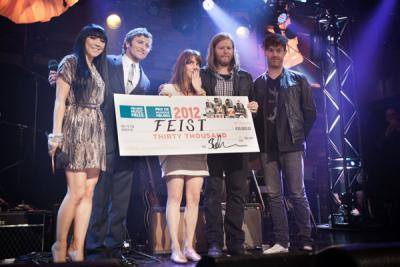 Feist doesn’t know how she will use the $30,000 she just received as winner of the 2012 Polaris Music Prize, declaring Metals the year’s best Canadian album, but she is contemplating donating part or all of it.

“For the last five years, all the merch from my tours goes to different charities and currently it goes to support the legal defence fund of the mega quarry [Citizens All United for a Sustainable Environment ak.a. CAUSE],” Feist said, referring to the group opposing the building of a limestone quarry in the Melancthon Township of Ontario by Highland Companies, which would destroy agricultural land and threaten the water supply.

In addition to CAUSE, her management says North Dufferin Agriculture and Community Taskforce (NDACT); Conserve Our Rural Environment (CORE); and MC2 are also beneficiaries.

Past recipients of her generosity from tour merchandise sales have included War Child, CARE Canada, the Salvation Army and Doctors Without Borders. In 2008 alone, that amounted to $200,000. The charities for merch sales are picked at the end of the year, says management.

“I don’t know if that’s where it will go, but I found the money comes from other places, the merchandise gets sold, everyone that buys a t-shirt definitely donates to charity,” Feist said.

“I think that’s a lovely thing. I’m the invisible middleman to that exchange happening. People get to donate and support charities and maybe become a little bit engaged and understand that it’s pretty easy to do. And this money will likely go to a similar type of thing.”

The proposed 2,316 acres quarry would become the largest in Canada.

“It would be deeper than Niagara Falls and as big as the city centre of Toronto,” Feist noted.

“It’s a terrible thing and I’m not going to speak about it eloquently. There are people who could speak much better on it. But since I can’t talk about it, I do my best to donate what I can to support people who do know how to talk about it.”

On the web site, whose url is nomegaquarry.ca, it explains more about its mission:

“To prevent the destruction of 2,316 acres of prime agricultural land in Dufferin County, Ontario and to encourage government reform around aggregate policy.

“The mega-quarry proposed by the Highland Companies would be one of the largest open-pit mines in the North America and as such would be highly disruptive not only to prime agriculture, and aquifers, but also local flora, fauna and quality of life for all residents of this area as well as upstream and downstream communities. By drilling more than 200 feet below the ground’s surface this proposed quarry would affect a number of pristine watersheds, including the Nottawasaga and Grand Rivers. Furthermore it would result in the diversion of approximately 600,000,000 litres of fresh water per day (every day in perpetuity) to meet operational needs.

“We also aim to encourage our government(s) to listen to the collective voice of Southern Ontario’s concerned population and eliminate the extraction of aggregate resources from the precious remaining rural landscapes of Southern Ontario. These operations compromise the integrity of our natural habitats, sensitive wildlife populations, water supply and hinder our ability to provide any measure of agricultural security for future generations.”

Last July, the Council of the Township of Melancthon met and passed a resolution to request that the Ministry of the Environment conduct a full environmental assessment of the Highland Companies quarry application.

On September 1, 2011, a statement on the Government of Ontario’s web site, read:

“Ministry of the Environment officials have thoroughly examined the technical reports which were submitted by the quarry proponents.  Based on a review of those reports, and because of the unique nature of the Melancthon quarry proposal, I believe a full Environmental Assessment is necessary.

“The McGuinty government is committed to protecting our water and our environment. Today’s decision ensures that a transparent and independent assessment of the environmental impacts of Melancthon quarry proposal will be conducted.”