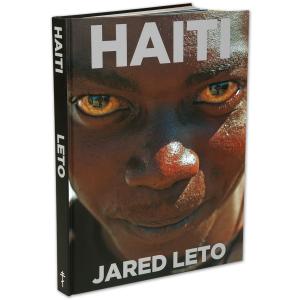 Jared Leto took on a multi-national record company that sued his rock band 30 Seconds To Mars for $30 million, but the devastation that remains in Haiti following the 2010 earthquake that killed 300,000 people and affected 3 million is a task that requires the whole world to chip in to fix.

The enormity of the job isn’t lost on the musician, director and actor. He is involved with relief organizations on the ground, but he’s also helping to gather support via the sale of a new hard cover book of photos he took during a trip there in 2011. Yes, add photography to his list of talents.

Haiti, as the book is simply titled, sells exclusively online for $100.

“All the proceeds go to help people in need there,” Leto tells Samaritanmag, while in Toronto for the premiere of his band’s documentary, Artifact, about the battle with EMI. “I lived in Haiti as a kid for a short time so I returned and I made a photo book. It’s got about three or four hundred photos in it and I worked on it for a year. It’s got some words and photos.”

Leto lived in Haiti in the early 80s when he was 15. “My family was doing volunteer work there,” he explains. Living in Los Angeles, he became a respected actor (inc. Requiem For A Dream, Alexander, Panic Room, Mr. Nobody) and singer/songwriter for 30 Seconds To Mars, selling closing to 5 million albums and touring all over the world, but he hadn’t been back to Haiti in 25 years.

“I kind of documented my return [in the book] and it was a really intense experience,” Leto says. “I went a year to the week later [that the earthquake happened, January 12, 2010]. I did that purposefully because I felt there was a lot of attention and then it died down.  So I went back a year after and it’s incredible — it seemed like the earthquake happened a day before still.

“I worked with Partners in Health to raise some money to build a well. It’s called The Echelon Tap. It’s a pretty substantial source of water down there that supplies water for an entire community. So we’re doing things like that all the time.”

Watch the clip below of Leto in Haiti.